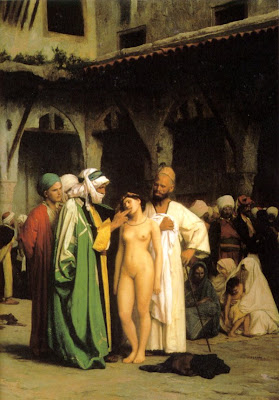 The Arab slave trade refers to the practice of slavery in West Asia, North Africa, East Africa, and certain parts of Europe (such as Sicily and Iberia) during their period of domination by Arab leaders. The trade mostly involved North and East Africans and Middle Eastern peoples (Arabs, Berbers, Persians, etc.). Also, the Arab slave trade was not limited to people of certain color, ethnicity, or religion. In the early days of the Islamic state—during the 8th and 9th centuries—most of the slaves were Slavic Eastern Europeans (called Saqaliba), people from surrounding Mediterranean areas, Persians, Turks, other neighbouring Middle Eastern peoples, peoples from the Caucasus Mountain regions (such as Georgia and Armenia) and parts of Central Asia (including Mamluks), Berbers, and various other peoples of varied origins as well as those of Black African origins. Later, toward the 18th and 19th centuries, slaves increasingly came from East Africa
Source:Wikipedia

Visit My Other Blogs

Thank you for Visiting!